Here’s 10 year old Felix again playing the Solo from Bohemian Rhapsody, he worked his butt off and I’m so proud of this pocket rocket!

I’ve had the pleasure of teaching this amazing young man for a few months now and he’s really something special. Just turned 10 years old, bags of confidence and a real feel for Rock Music, watch out for him!

George has been my pupil for a few years now and he knocked my socks off with this solo performance at Greenacre School recently. Calm and collected (he even checks his watch at one point) Totally improv solo and I’m so proud!

I’m very proud of my pupil Harley, he stuck at it for weeks and he’s nailed the solo from Hotel California.Look out for this kid, he’s going to be a fantastic player!

My Studio is finished so here’s a sneak preview of the first track I recorded there. A rough mix of Winter Wonderland from my forthcoming Gypsy Jazz Xmas album “Djangle all the Way”

I’ve spent the last couple of days writing out charts for a guitar gig in Bilbao with Stax recording legend William Bell. We’ll be playing the Getxo Blues Festival on 14th July and it’ll be fantastic, he’s the real deal!

By the end of Summer, my studio should be up and running and I’ll be offering my services, productions and guitar playing.
I also plan to start work on my own album of Gypsy Jazz Xmas tunes…WATCH THIS SPACE!
Mardi Arts Music Production, Sheffielders will clock the reference! www.mardi-arts.com xx

I need to dig out the Sunburst Bound Edged Custom Telecaster and stripey T Shirt for my Police Tribute band gig on Friday.
It’s been a while so I’ll be listening to the songs and sorting out effects and delay times this week.
We’re adding a keyboard player this time instead of the usual 3 piece, so I can open up the guitar parts a bit! 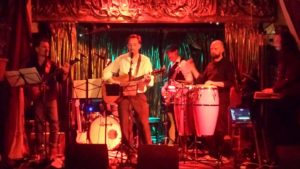 This Sunday 22nd January I’ll be doing the Bowie tribute band again at The Ivy House, almost a year since the last one.
It’s a very eclectic gig, playing in the style of Bowie’s lead guitarists over the years, Ronson, Alomar, Slick, Fripp, Belew, Rogers and Leonard.

Dan Maitland is bandleader and he’ll sing most of the lead vocals, except Starman which I’ll sing. 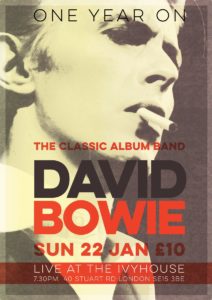